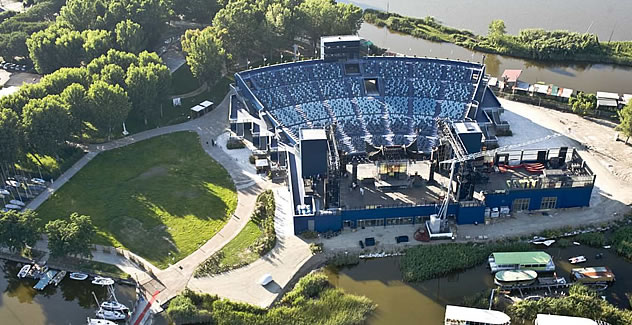 The new Great Open Air Theatre is placed in the green side of the future Giacomo Puccini Music Centre at Fair Park in the peat bog peninsula of Torre del Lago. The symbolic meaning of this project is really important because it represents Giacomo Puccini return to Torre del Lago. In 1921, Puccini was forced to leave Torre del Lago because of the peat-mining onset, which caused noise and bad smell inside the area. He moved to Viareggio.

The Parco della Musica of Giacomo Puccini building started more than 80 years after. It has been projected to be one of the most important centre for culture. It consists in using old areas and systems one time dedicated to industry, in order to create places connected consacrated to music, to increase the value of such places where one of the most important composers of music history, usually found his ispiration.

The New Theatre represents the first building inside Parco della Musica and is located on the shores of Lake Massaciuccioli. It was inaugurated 15 June 2008 and immediately started its music activity.

The new theatre has replaced the previous precarious metal structure dedicated to the famous Puccini Festival for years.

The new theatre is located inside a wide area of 245.000 square metres, delimited by the Massiacuccoli lake (North and East), the Piazzale Belvedere (South, in front of Villa Puccini) and the small village of Torre del Lago (West). This area covers a surface of 6.600 square metres and the arena capacity is 3.200. The new theatre is made of wood and crystal to reduce its environment impact and provided with high quality, sophisticated technologies and sound systems.

Under the arena there are a wide foyer, an auditorium with a capacity of 500 seats, the dressing rooms, the artist hall, store-rooms and the toilets.

The theatre structure has a main stage and a lateral staged dedicated to the set movements.

The proscenium is delimited by two technical towers containing the equipments for the electricians, mechanics and all the other operators. In front of the stage, there are a wide orchestra pit, the stalls and, at the end of the arena, a direction tower.

We had the honour to take part in the theatre building. Our Engineer Bellandi was nominated Responsabile Unico del Procedimento (person in charge), so we had both the privilege and the responsibility to manage the work.