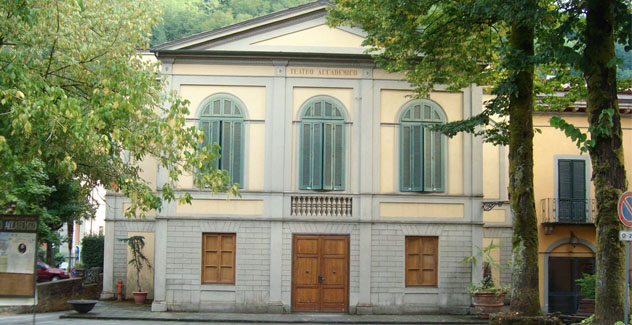 Accademico Theatre in Bagni di Lucca was built at the end of 1790 in Corsena valley.

This initiative was promoted and economically supported by some citizens of Bagno Comunity who had founded “Accademia del Teatro” Association, one of the cultural associations which characterised Italy at the end of the eighteenth century. They were supported by many Lucchese nobles like Cristoforo Boccella, Gerolamo Guinigi, Lelio Orsetti, Francesco Buonvisi, etc.

Despite of many law problems, the Theatre grew as a wonderful entertainment site remaining an important cultural spot in Bagni di Lucca for a long time. Especially during the summer, many exhibitions took place in the theatre. Many of them were charity shows whose takings were given to the poor of the village. It was also the head office of the village Società Filodrammatica which organised many successful exhibitions. A community of aristocratic holiday makers incentivised the theatre activity too.

In 1975, 30 April, Bagni di Lucca Municipality became the new Theatre’s owner bringing to the end to a successful era: Accademici Association stopped its theatre management. The theatre was closed to renovation and the work was carried out between 1982 and 1993.

We managed its systems design and administrative procedures to reopen the theatre, now with a capacity of 304 seats.