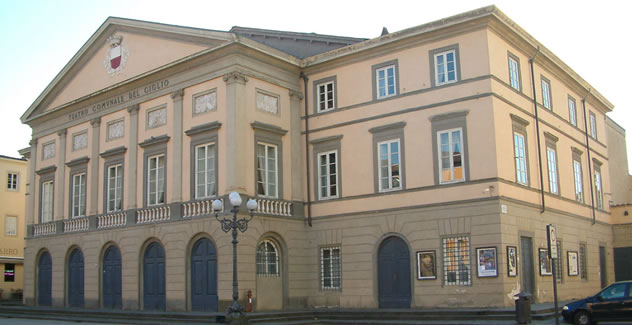 Giglio Theatre is one of the historical national theatres. It dates back to the 17th century and in 1985 the Ministry of Performing Art gave the title “Teatro di Tradizione” (Theatre of Tradition).

Lucca city is very proud of this prestigious building: its seasonal programme is selected, attractive and important.

For many years, we have supported Giglio Theatre providing our consultancy for the technological system design and managing its administrative and authorising procedures. Our assignment requires complexity and quality of the systems both to guarantee safety in all aspects and to safe the immutable original structure of the theatre.

We have always advised on best-practice safety systems in respect of its architecture and without affecting the original structure.

Our experience is always applied to fulfil our responsibility to this important assignment and we are proud to have been among the companies selected to meet regulatory requirements to re-open the theatre with its capacity in 1997. The project had great expectationsand we were gratified by the good results.

The birth of “Teatro Comunale del Giglio” dates back to three centuries ago.

There were two active theatre halls in Lucca in the 17th century. One of them was inside Palazzo Pretorio (Sala del podestà) and the second inside Palazzo De’ Borghi. Both of them were not enough to satisfy the needs of its inhabitants. On August 19th 1672 the Council of the Republic of Lucca, in order to meet the increasing interest for the opera, in a town with a flourishing trade as Lucca, decreed to open a public theatre adapting and old convent. A citizen board studied the possibility of converting the old Jesuit Church of S. Girolamo, whose order was suppressed by Pope Clement IX, for such a purpose.

Architects tried to realise a theatre with a good view from the stalls and a wide stage which was able to host the first theatrical equipments.

The “Teatro Pubblico” was inaugurated with a solemn rite On January 14th 1675, presenting two operas, "Attila di Capua" by Niccolò Berengani and "Seiano" by Niccolò Minato. During the next 13 years, two opera seasons were staged in the Public Theatre: one during Carnival festivity and the other one in Autumn.

On February 16th 1688 the theatre was destroyed by a fire. The reconstruction was a problem because in the small Republic of Lucca hadn’t enough money. For this reason, the theatre was reconstructed only five years later when the Council of the Republic decided its rebuilding (on August 22nd 1692).

The reconstruction, according to the original plans of Francesco Buonamici, enriched the Theatre with new decorations and correcting the imperfections of the previous structure. The ceiling was painted by Lucchese painter Angelo Livoratti and the stage was rebuilt by Lucchese Silvano Barbati.

On December 29th 1963 the new Teatro Pubblico  was inaugurated with the presentation of “Giustino” a melodrama by Niccolò Berengani, music by Giovanni Legrenzi and “Tiberio a Bisagno” by unknown persons, music by Domenico Gabrielli. Teatro Pubblico started its new elegant, gorgeous fashionable activity which made the Theatre the “place to be” for the aristocracy from Lucca and the nearby cities.

The new theatre attracted important artists: here, in 1744 Vittoria Tesi sang and Luigi Boccherini performed at the age of 18.

Its activity was so linked to the city life that when Lucca lost its independence in 1799, the theatre suffered a period of crisis. The private Teatro Castiglioncelli in Via del Moro prevailed on it.

Neither Elisa Bonaparte, who ruled Lucca Government from 1805 to 1814 with his husband Felix Baciocchi, was interested in the theatre. She preferred to manage other problems like the water system, the viability, school, urban decorum and fine arts.

The Government decided to rebuild the theatre with the name “Teatro Nazionale” to satisfy the citizens. Despite the change of the name, the theatre was as ruined as the previous one: for this reason, more and more plays and musical comedies were performed in other small theatres like Castiglioncelli Theatre or Pantera Theatre in Via Fillungo.

Lucca needed a new theatre which could meet the trends and changing tastes and which could keep on its traditional artistic activity famous everywhere in Tuscany.

Substantial restoration and enlargement became necessary: in 1817 construction work was started on the new building under Architect Giovanni Lazzarini’s plans. The building was ultimate in 1819. Lazzarini designed four tears of boxes and an additional balcony.

Maria Louise of Bourbon, new sovereign of Lucca after the Congress of Vienna, inaugurated the new Theatre and chose its new name.

The Supervisor suggested three names: “Teatro S. Luigi” in honour of Duchess Maria Louise, “Teatro del Giglio” in honour of the lily flower which stands on the coat of arms of the Bourbon and “Teatro Alfieri”, in honour of the most important Italian tragic writer. The theatre received the name “Teatro del Giglio”. Since then, the elegant theatre with its noble neo-classic prospect, has welcomed the best singers and the most important ballets, hocus-pocus shows and operas of the greatest authors of the Italian melodrama. Its Autumn Season in 1819 opened with “Aureliano in Palmiera" opera by Gioacchino Rossini. Here, in 1820 and 1821 the tenor Tacchinardi and in 1831 Drupez performed their songs. Maria Malibran – defined "admirable singer with the voice of a mermaid” - enchanted Lucca audience in 1834 and 1835, Stepponi in 1840 and Gabussi in 1842. In addition to the opera season, Giglio Theatre hosted many famous companies: Gustavo Modena’s company in 1830, Compagnia Chiarini in 1831, Compagnia Vergano in 1837 (who performed thirty shows and came back the following year), Compagni Mascherza (with the famous Adelaide Ristori) in 1842 (who performed thirty shows) and Compagnia Lapparini in 1846. After the political events of 1840s, people were less interested in theatre shows: Giglio kept on its lyrical shows but the audience often transformed the performances into patriotic exhibitions, especially if the theatre hosted operas by Giuseppe Verdi. From the Giglio’s flagpole, the first Italian tricolour was raised.

When the Dukedom of Lucca was annexed to the Grand Dukedom of Tuscany, Lucca was  no longer the capital and Giglio Theatre suffered another period of crisis. In 1856 the Municipality of Lucca acquired it to solve its crisis and a new autumn season opera was presented. The traditional spring opera season was not organised any longer because of its increased costs.

With gas and electrical lightning, both the stalls and the stage illuminations could be controlled. In the past, the audience had been illuminated as the actors on the stage, or even more! With the new lightning, before the show, the audience was darkened. This innovation brought the curtain to a new use: it was raised just at the beginning of the performance and then dropped at the end of the acts or to change scenes (in the past, the scene changes were on the open stage).

In that year, a "La fanciulla del West" performance was programmed for Giglio Theatre. Giacomo Puccini came to Lucca to explain his point of view: he asked the Municipality to lower the orchestra floor and reduce the stage. The work was immediately approved and finished by the Junta: in autumn the opera was performed with the Maestro sitting in the audience.

In 1911, the halls and the staircases were restructured, the ceiling and the roof were consolidated, the walls were plastered, some decorations in the hall were repainted, the hygienic-sanitary systems were installed and the stalls and the marble floor were renovated.

The theatre was closed in 1917, during the First World War and converted into a military depot. It reopened in 1919 with three operas by lucchese composers: “Tosca” by Giacomo Puccini, "Loreley" by Alfredo Catalani, represented for the first time in Lucca, and "Dispetti amorosi" by Gaetano Luporini.

The Board nominated to monitor public buildings reported the necessity of reconstruction work.

For this reason, Giglio Theatre was closed from 1936 to 1941: many designs were presented but the opinions were too different: “should we consolidate it or knocking it down to build a new one?” Prefectural Superintendent Franci decided for a renovation work and started immediately.

The services were renovated; the roof and the foundations were consolidated, all the electrical systems were reinstalled to avoid fire caused by short circuit; the technical management was under Engineer Righetto Pianucci, the decoration was conducted by Ezio Ricci.

The Giglio Theatre was open again in 1941 with a great opera season which included "Traviata" and "Tosca". The war was near and the Theatre started suffering its consequences.

On September 1944, the city obtained its freedom and the theatre activity restarted with prose shows performed by local companies for the army.

In 1951 another modernisation was necessary: a new design required a gallery in the central part opposite the stage at the fourth level of boxes and a loge without affecting the lateral boxes arranged in that level. Under the gallery, a wide and modern foyer was designed. It was equipped with all the services.

In 1957 Engineer Carignani’s plants were approved. The works were completed in the Spring of 1958 and for the Feast of the Cross a great opera season was organised. It was dedicated to the big Lucchese Maestro and included "Manon Lescaut" and "Butterfly".

On March 1983, the activity of the theatre was suddenly stopped. Its structure didn’t meet the safety and regulatory requirements to open.

These works lasted seven months and were completed on January 1984. The Municipality of Lucca, in collaboration with the Regional Government of Tuscany, planned a reconstruction of the whole building in order to have a more modern and functional theatre without affecting its original architectural structure. In 1968 the Municipality of Lucca asked the Ministry of Performing Arts the title of “Theatre of Traditions”. Giglio Theatre received it in 1985. It is an honour bestowed on very few great, historic, Italian theatres which confirms the Giglio a long-time artistic traditional theatre.