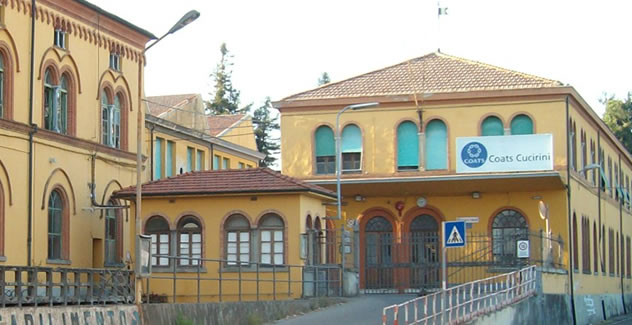 Coats Cucirini s.r.l, or simply “Cantoni”, is an important historic establishment for Lucca citizens of a certain age.  In our memory, it is considered the spun and sewing thread manufacturer par excellence whose products were first used by our grandmothers and then by our mothers.

In 1990 Cucirini Cantoni Coats celebrated its hundredth birthday: during this time, it has progressively developed in an to an international, modern and dynamic style. That’s why Coats Cucirini continues to be a leading company in its sector.   It has maintained a special position in the business community of Lucca.  Since before the Second World War it has been a motivating power of regional commerce, and one of the largest businesses in the Lucca Valley.

We are proud to have supported Coats Cucirini for the last 20 years, managing the fire prevention and systems design. The history (from site www.coatscucirini.com)

In 1826, brothers James and Peter Coats founded the first of their firms in Paisley, Scotland, that became a leading company in the sewing thread sector.

In Lucca, Carlo Niemack founded a sewing thread mill among the narrow streets of the ancient city centre. Soon, in 1890, it was moved into a wider plant in Acquacalda, a district 2 kilometres away from the centre. The small Niemack company was renamed “Fabbriche Italiane Filati Cucirini”, FIFC, with their head office was in Milano, Via Brera, 12.

DJ. & P. Coats Ltd had been a thread supplier in the Italian Market for many years. In 1904 it acquired FIFC and formed Cucirini Cantoni Coats, CCC: the business was expanded and sales was reorganised. The Acquacalda plant was equipped with high technology equipment and production processes, and it manufactured products unequalled by its competitors.

James Henderson, a young Scottish man destined to become famous in the company history, managed the CCC development. He left the CCC management in 1995, after 45 years.

At the beginning of the new century, the thread market welcomed the spool’s birth, a new product which changed buyer habits. Spools are cylinders on which the thread is wound.

The production increased, costs decreased and in 1915, when the First World War was declared, the company employed 1000 workers.

In the textile sector, the competition between spools and bobbins increased, and CCC realized that the bobbin era was going to end.

In 1931 CCC acquired “Industrie Sete Cucirine” and the trademark “Tre Cerchi”, becoming a leading company in the spool sector with many kinds of mercerised cotton threads.

After the Second World War, CCC kept to its gradual development acquiring new plants, growing its commercial network and introducing innovations and improvements.

One hundred years after its birth, CCC continues to multiply its activities and its sectors. Its name is a guarantee for both raw goods and end products in the yarn sector.

In 1996 “Coats Cucirini” acquired by merger the subsidiary companies Coats Italia Filati Industriali (CIFI) and Lamprom S.p.A., which operated in the clothing, shoe, and leather industries, specializing in sewing thread sector and zippers.

In 2001 Coats Cucirini acquired Barbour Campbell Industria Filati with head office in Vimercate (Milan) after the Group had acquired the British subsidiary.

This new corporation, merged with Coats Cucirini in the same year, started producing threads specialised for shoes, saddler, and household and automobile upholstery, among others.